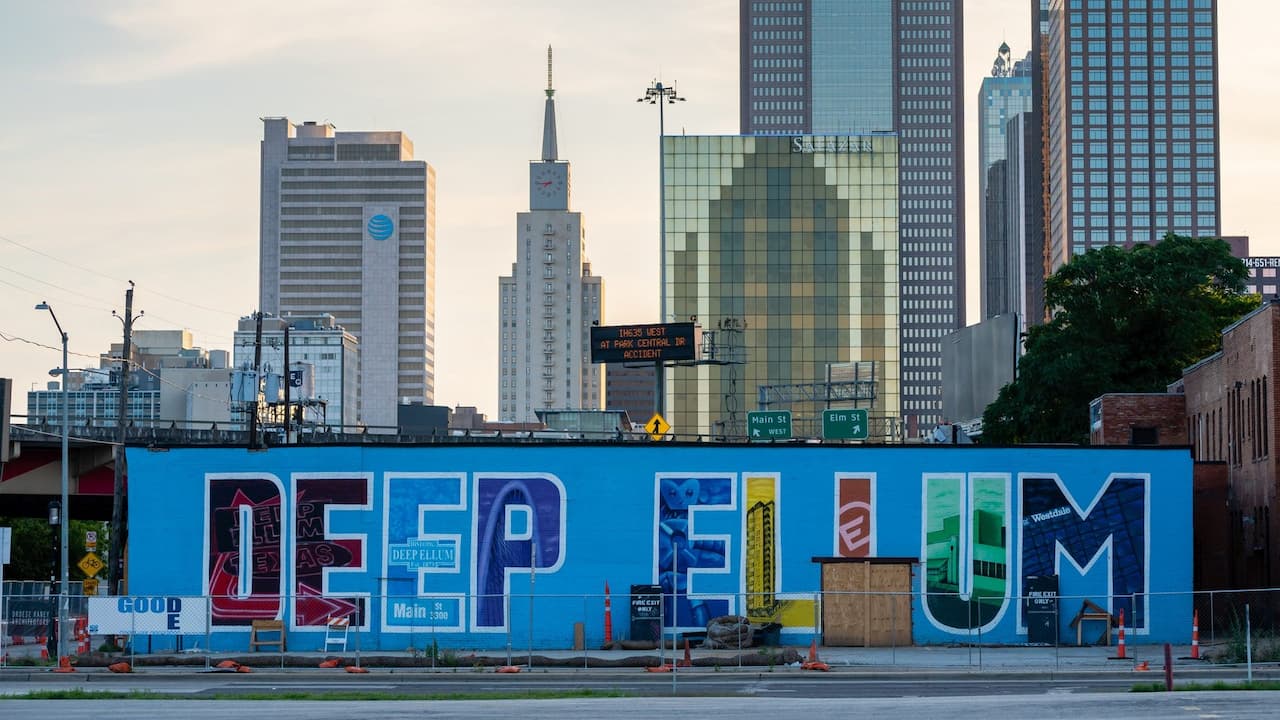 Brimming with giant robot sculptures, breweries, art festivals, Deep Ellum is the quirky step-child of the Dallas nightlife. With constantly changing murals, a great food and bar scene, and live music everywhere, this is one of the coolest neighborhoods to spend a night on the town.

Situated in Dallas County and is one of the top spots to live in Texas. Residing in Deep Ellum provides inhabitants a metropolitan atmosphere, there are a plethora of bars, eateries, cafes, and parks. Numerous young experts occupy Deep Ellum and citizens tend to be progressive.

‍Pecan Lodge is known for its time-honored traditions and recipes passed down from generations.

Harlowe MXM is more than a mere bar or restaurant. It’s a self-described “drinking and dining complex” with three separate spaces ranging from laid-back to upscale. Don’t miss the massive rooftop bar, which offers a spectacular view of the Dallas skyline.

Oni Ramen is a tiny restaurant and generally considered to be the best ramen place in Deep Ellum, so it’s sometimes standing-room-only. Try the Oni Reaper, a super-spicy dish–if you dare.

In the mood for something cheap, quick, and delicious? An Uncle Uber’s “sammich” may be the answer to your culinary prayers, although you’ll have to brave the hole-in-the-wall atmosphere.

Experience the authentic flavors of Northern Chinese street food at Monkey King Noodle. Their LaMian (hand-pulled) noodles and Xiao Long Bao (soup dumplings) will transport you to the night markets of China and Taiwan. Everything, even the hand-pulled noodles, is fresh and made-to-order.

If you want New-York-style pizza, Serious Pizza is the place to be. People put up with the long line and downscale décor because this is the real deal. It’s practically a Deep Ellum tradition to grab a slice here after a night out.

As you’ve probably gathered by now, Deep Ellum has plenty of rooftop venues—and Green Room is one of our favorites! With a pool cue and a cocktail, you’re set for a fun evening. Cheers!

Twilite Lounge is beloved for its authentic, old-school vibe and amazing live music. If there’s no show going on, pop some money in the jukebox instead.

If craft beer is your thing, you’ll love Dot’s Hop House & Cocktail Courtyard. With a 10,000-square-foot patio and more than 100 beers on tap, you can’t go wrong.

High and Tight is hidden away behind a working barbershop. Toast your fresh fade with one of their special cocktails—described as “works of art.”

Black Swan Saloon doesn’t have a sign, so it might be hard to spot at first. There are also no menus, so order something traditional or ask the bartenders to whip up something on the spur of the moment. Just tell them what kind of drink you’re in the mood for, and they’ll make something especially for you.

The Bomb Factory is a state-of-the-art, 50,000 square foot venue located in the heart of Dallas’ historic Deep Ellum which is known for its rich music-centric culture. Home for concerts that matter and events that swagger.

Trees has been host to some of the biggest names in music including Radiohead, Nirvana, Arcade Fire, Deftones, Tool and Erykah Badu to name just a few. With a recent renovation and an award winning sound system, Trees is the place to see your favorite bands!

Whether you want to see a stand-up perform or take a class yourself, you’ve found your new home-away-from-home. Dallas Comedy Club hosts acts five nights a week and offers classes in improv, sketch, stand-up, and storytelling.

In Louie Louie’s Piano Bar write your song request on a napkin, and the entertainers will play and sing it from memory. Louie’s is musician-owned, so all the performers are multi-talented.

George Bannerman Dealey Montessori is a highly rated, public, magnet school. It has 614 students in grades PK, K-8 with a student-teacher ratio of 15 to 1. According to state test scores, 91% of students are at least proficient in math and 88% in reading.

‍School for the Talented & Gifted in Pleasant Grove

School for the Talented & Gifted In Pleasant Grove is a highly rated, public school. It has 390 students in grades 4-8 with a student-teacher ratio of 18 to 1. According to state test scores, 96% of students are at least proficient in math and 76% in reading.

Sudie L. Williams Talented & Gifted Academy is a highly rated, public school. It has 424 students in grades 4-8 with a student-teacher ratio of 16 to 1. According to state test scores, 95% of students are at least proficient in math and 87% in reading.

Robert S. Hyer Elementary School is a top rated, public school. It has 492 students in grades K-4 with a student-teacher ratio of 14 to 1. According to state test scores, 84% of students are at least proficient in math and 83% in reading.

University Park Elementary School is a top rated, public school. It has 446 students in grades PK, K-4 with a student-teacher ratio of 13 to 1. According to state test scores, 85% of students are at least proficient in math and 84% in reading.

As a former industrial area, Deep Ellum may not have as many parks as other neighborhoods, but at the unofficial “Beach Ellum,” you can pretend you’re at the ocean. In Sandbar Cantina, you can also play on “sandbar” league teams; choose from sand soccer, volleyball, dodgeball, and ping pong.

This urban dog park is in the heart of Deep Ellum with great views of downtown and eclectic artwork. You and your four-legged friend are within walking distance of great dog-friendly restaurants and bars. Bark Park Central is a 1.2 acre "off-leash" dog park, in downtown Dallas.

The DART Green Line connects to the Deep Ellum and Baylor stations.

Why You’ll Love It

Deep Ellum is a vibrant entertainment district in Dallas, Texas. It's known for offering some of the best nightlife and delicious restaurants in the city. Deep Ellum offers an eclectic mix of entertainment options, from music venues to trendy bars.